It’s a family affair, so get outa’ there!

Ever since we moved to this idyllic spot in Boquete, there have been Yellow Headed Cara Cara nesting across the road. Our neighbor always has a snack for them when they stop by. Now that he is away for awhile we have taken up the mantle. We were wondering why they hadn’t stopped by for a couple of weeks, thinking maybe they sensed our neighbor was gone. It delighted and surprised us when they showed a few days ago with a new little one. Little, well.. it’s almost as big as Mama already. 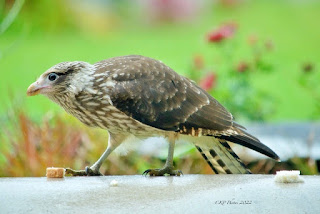 Isn’t he grand? I feel like it’s a he. The eyes are already quite distinctive and that is the easiest way to tell male from female as far as I know. The male’s eyes are heavily masked, seeming like they are wearing makeup compared to the plain look of the eyes of the female. How about that ladies? Nature is such a brute to the feminine energy. 🤷‍♀️ 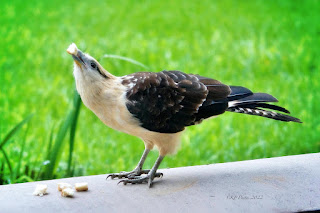 Plain, maybe, but she’s got style 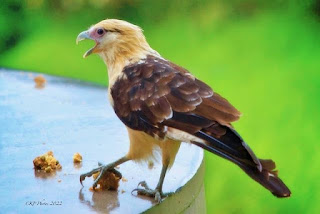 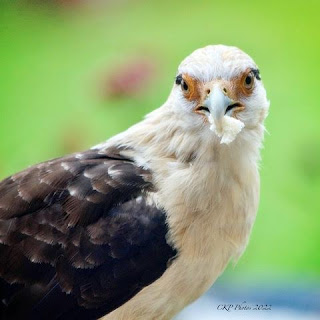 Yep, he looks like he’s wearing false eyelashes but that is just his mask extending behind those golden ringed eyes
I’ve learned a lot about how they teach the little one, and the fact they brought it here for an introduction is awesome. We feel honored. We also give good snacks. 😉 The other day I watched it trying its wings and flying from rooftop to tree and circling back. Mama and Dad just watch and wait. Once they showed it where to come for a bite, they made it come alone and watched from the other house. 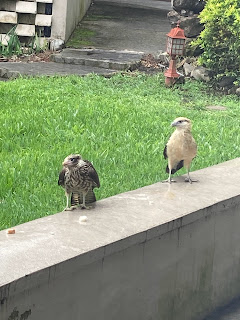 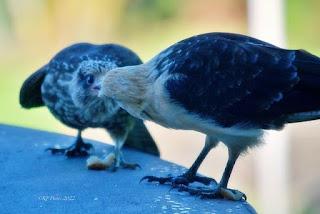 The first time, they fed baby 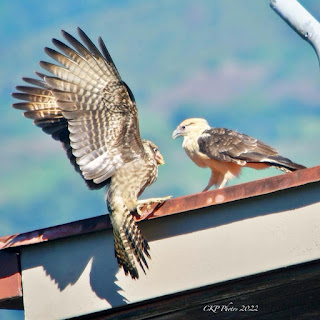 The next day it was sharing with Mama! 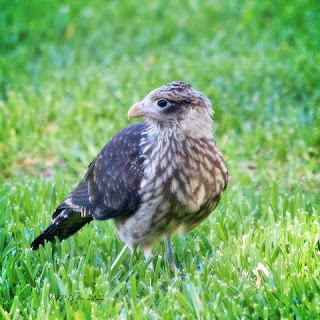 Junior
Then disaster nearly struck. Yesterday I looked outside and Black Vultures were gathering on the neighbor’s roof. I thought, ‘Okay, I draw the line here, boys’. Then I saw baby perched on the rail beneath them. First there was one, then two, three and four. They were waiting for baby to fly! Mama and Dad were nowhere to be found. Hubs kept reminding me that vultures don’t kill and only eat dead things. Nope. I sensed differently and looked it up.
Unlike Turkey Vultures, Black Vultures will kill small animals and often present a problem for farmers.
I opened the door and yelled at them. All they did was look at me but that gave Junior a chance to fly off. Once they realized the snack bar was closed they left.
Whew! 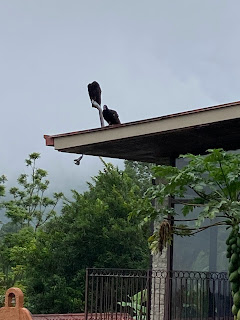 “The kid got away, Ralph” 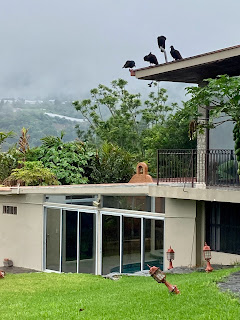 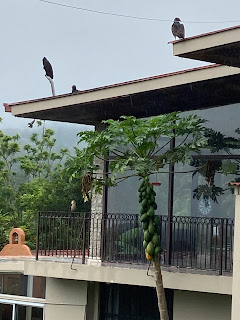 After Junior flew into the trees Mama took its place, just to make sure..
I’m happy to say no birds were harmed in this standoff.
I did, however, witness one of the falcons dining on a particularly annoying mockingbird a month ago. 🤦‍♀️
They do arrive quite early. I guess they didn’t get the memo that said we’re retired and like to sleep past sunrise. Mama and baby were back this morning. I hope Dad’s alright.
It’s a family thing.. 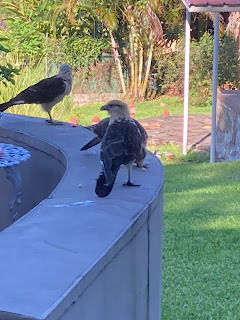 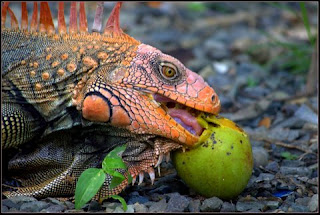