Well This is a Fine Mess.. 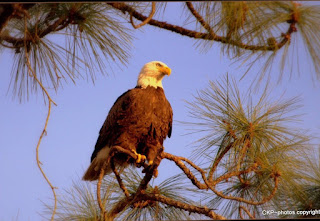 Please remove my image from all associated advertisements. I am resigning my role as the country’s National Emblem. I am regal, I am a Hunter but never take more than I need. I live in accordance with the natural order of Existence. There is no duplicity in Nature. With no voice we cannot lie but our eyes see the truth. Once we sought to be more like humans and were envious of their accomplishments. Now we face extinction and have no one to blame but those who were put here to protect us, to keep order and balance on this world. Their ‘intellect’ has become ignorance at its worst to not realize that what they control is only one another. Nature will always find a way....

Popular posts from this blog

February 01, 2020
The elders watched from the precipice of destruction, stoic, unmoved in their constant vigil, feeling mildly perturbed by it all.

The ancient one shivered against the untimely chill that had crept insidiously over the season, forcing his tribe to take to the skies all too soon, seeking warmth- sustenance.

The Great Hunter finished the remains of its meal wondering when the last kill would be as the Keepers pushed further in, stripping away the vestiges of their life’s blood.

They bowed their heads in reverent shame for such disregard of their Mother’s world, their chirping drowned by the clamor of progress, the cacophony maddening.

She made them stewards of her Creation, they hold her Essence in their hands, delicate, brilliant, mighty, precious! How could they betray her trust for gold dust?

Can they not see the universe in a grain of sand, feel her breath in the rush of the wind, see her artistry painted across the  canvas of a blue sky in the  rainbow after a storm?

December 28, 2019
The past year was a whirlwind of change for me. I suppose some, more stationary,  people might say my life has been like a whirlwind. We have moved more than a dozen times in 30 years and to different cities, states and even out of country! Before my sons were grown, these moves affected their lives as well. We have become known as “the gypsies”.
I am a water sign, a Cancer, which influences me to be a nester by nature with an adventurous spirit. It has been tested many times. I have laughed, cried, screamed at the walls and picked myself up by the proverbial bootstraps to carry on. When I was younger I bemoaned the people I left behind and envied those friends who stayed in the same house, the same town, the same city and state so that they were one with their surroundings, family and friends. I longed to hang onto what I had, like a photo in album that you keep forever. Yet we all know that nothing in this tangible world lasts forever. So I keep the images in my heart and memory a…
24 comments
Read more

It Will Always Be Too Late

March 31, 2020
to know the joy of connection, of fulfilling someone's dream of acceptance, to give of yourself when you feel you are depleted, if you wait for a 'better time', a clearer head, the 'right' moment, or different circumstances.  Death is a dream for those that leave but can be a nightmare for those left behind.

Words of the heart can be spoken across the veil, even with the breath of life between souls; but why wait?  The time is always now for sincerity, love, expression and truth.

Say it loud, say it clear. You can listen as well as you hear. It's too late, when we die to admit we don't see eye to eye...

I love you all!!! Never forget.